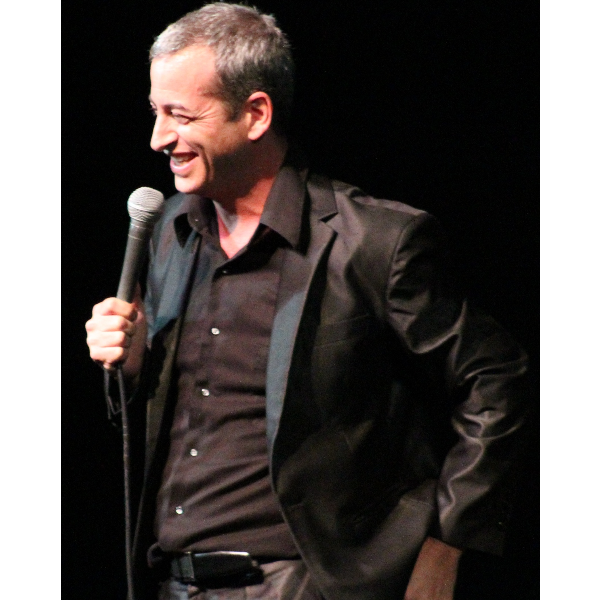 There is a two (2) purchase food/beverage minimum per guest.

Introducing Ron Feingold’s “Comedy A Cappella!” A blend of traditional stand-up comedy with ear-pleasing a cappella music all sung by one person. What makes this show special is the fact that Ron sings ALL of his own vocals! He sings the bass, tenor, alto, soprano and lead vocals in these funny, up-tempo songs and parodies. In addition, Ron custom writes material and songs for his corporate clients and he is a master at establishing instant rapport with his audiences.

This “one man vocal band” has traveled thousands of miles and crossed countless stages since it all started back in January 1990. Ron has performed in 47 of the fifty states, is a regular performer in the cruise and corporate industry and has opened for bands like The Beach Boys, REO Speedwagon, Grand Funk Railroad, BJ Thomas and Grammy winning Jazz vocalist Diana Krall.

Ron Feingold’s musical comedy show is truly one of a kind and must be seen and heard to be believed! www.ronfeingold.com

Andy Imlay was born several weeks early in Owensboro, Kentucky. He has Cerebral Palsy, a congenital disorder that often requires him to use a wheelchair to get around safely. Having a disability doesn’t get him down, however. Instead, it fires him up. It gives him a unique perspective in life, and that translates into comedy gold. He first grabbed the microphone in July of 2014. Now living in Evansville, Indiana, he found the performing arts to be a welcome respite from his day job working retail. Stand up affords him the opportunity to be his true self, share his experiences, and his sometimes dark, other times silly comedic observations. He jokes about his disability, of course, because it is one of the first things people notice about him. He is far from a one trick pony, however, and doesn’t rely on it as a... ahem… crutch to get laughs. He covers a wide range of subjects in his act, such as living alone, church healers, speed dating, WWE, the difference between heaven and hell and, of all things, pickles.
Andy has worked hard at his craft during the seven years that he has been a comedian. He has performed throughout the US, including appearances at top clubs, such as The Comedy Caravan in Louisville and the Orlando Improv. He has opened for Dustin Diamond and Mario Saenz and has showcased at the Live Laughs Comedy Festival in Ohio and the Tim Northern Comedy Festival. He also placed runner up at Wiley's Comedy Joint’s annual Fireworks Competition in 2020. Wherever an opportunity arises, you will find him under a spotlight, making people laugh.
His hard work has paid off. Some interesting opportunities have come his way, and he has embraced them all with open arms. In it’s 42 year history, only two comedians have ever performed at the annual Superman Celebration in Metropolis, Illinois. Andy was one of them. He was also featured in a Nike ad, modeling a shoe for people with disabilities. One of his personal highlights, however, was being retweeted by the guys in South Park, and he has the swag to prove it. Andy Imlay believes in positivity, and he positively enjoys making people laugh. Whether he is performing for ten people or 300, he always gives his all to every performance. You may not know him yet, but you will soon. Catch him on YouTube, or at a club near you.